With what follows I want to demonstrate that the basic functionality of Oxcal is reflected in this tiny bit of code:

¹⁴C is produced in the atmosphere by solar radiation, is than oxidised to CO2 and than introduced into the foodchain. From than onward, the ¹⁴C decays. 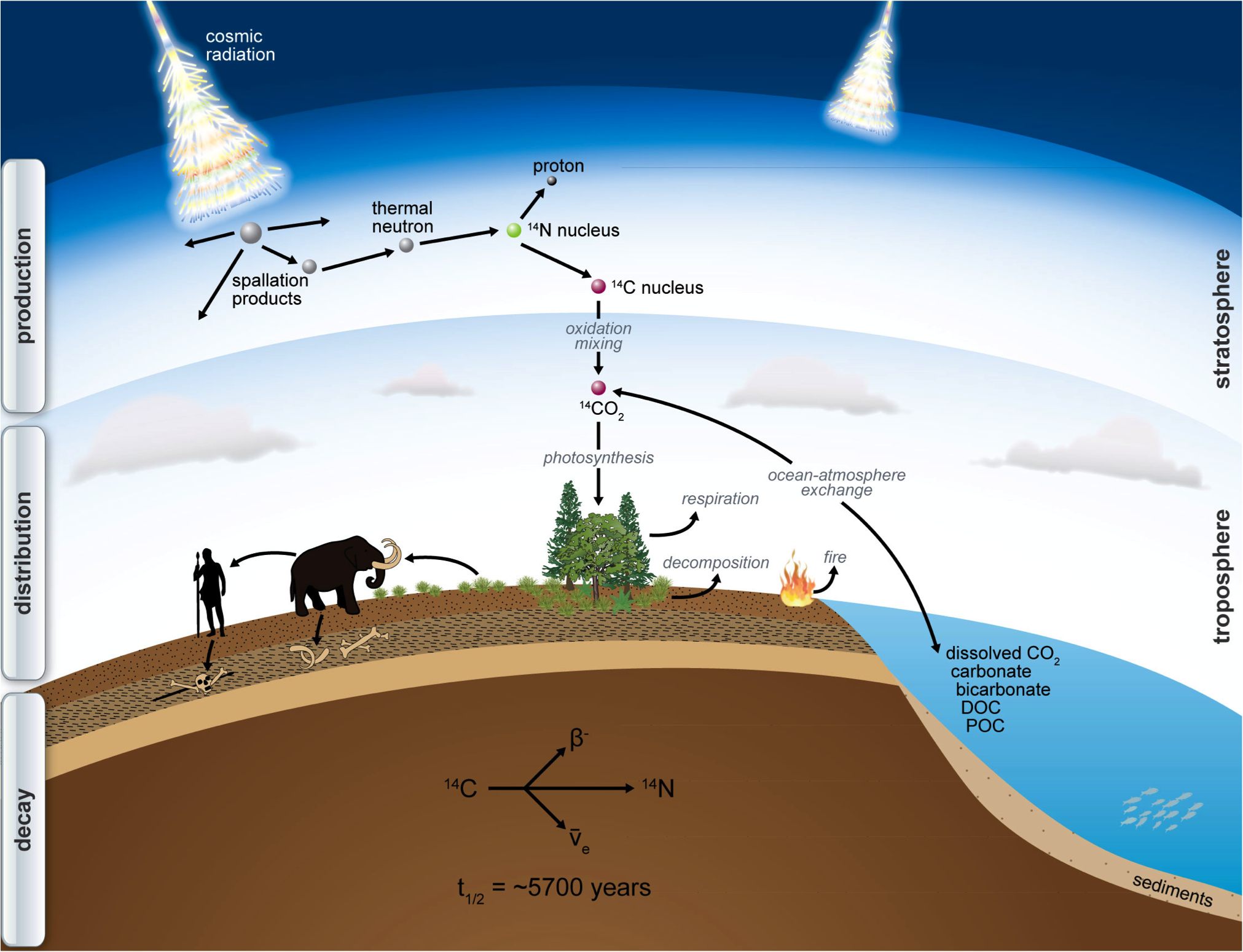 The nonlinear nature of the ¹⁴C curve

The problem is, that the amount of ¹⁴C in the atmosphere was different during different times. This causes that there is no simple linear relationship between ¹⁴C years you get from the lab to the real calendric cal bp or bc date. The expression of this is the wiggly nature of the calibration curve: 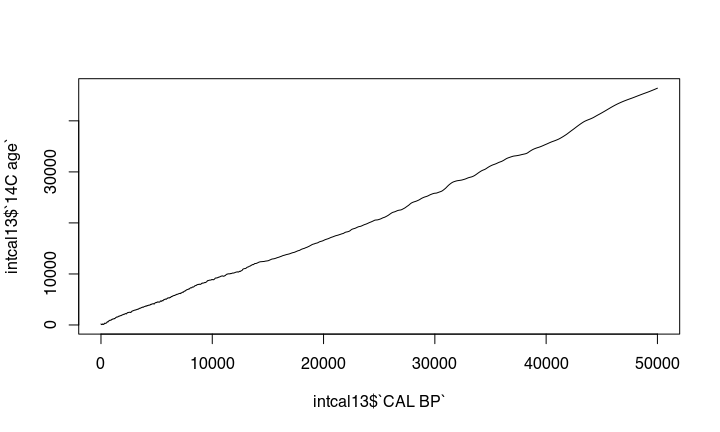 This becomes more obvious if we zoom in: 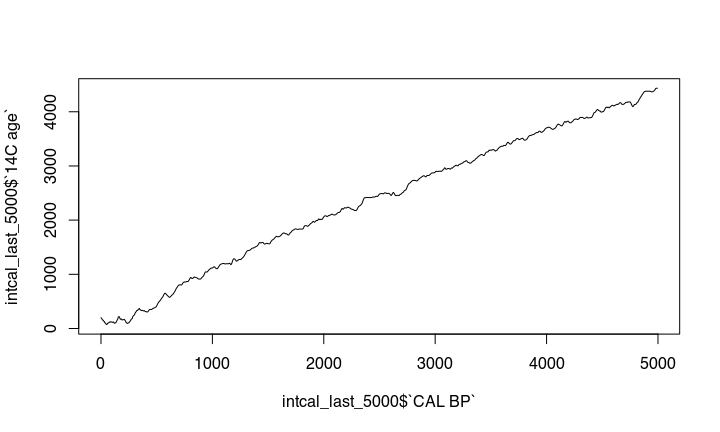 The main reason for that might be the fluctuation of the solar activity, that causes different amount of solar radiation and with that also different ¹⁴C values. One fluctuation is a well known 11 year cycle, but there are other, not so well behaving fluctuations, too. 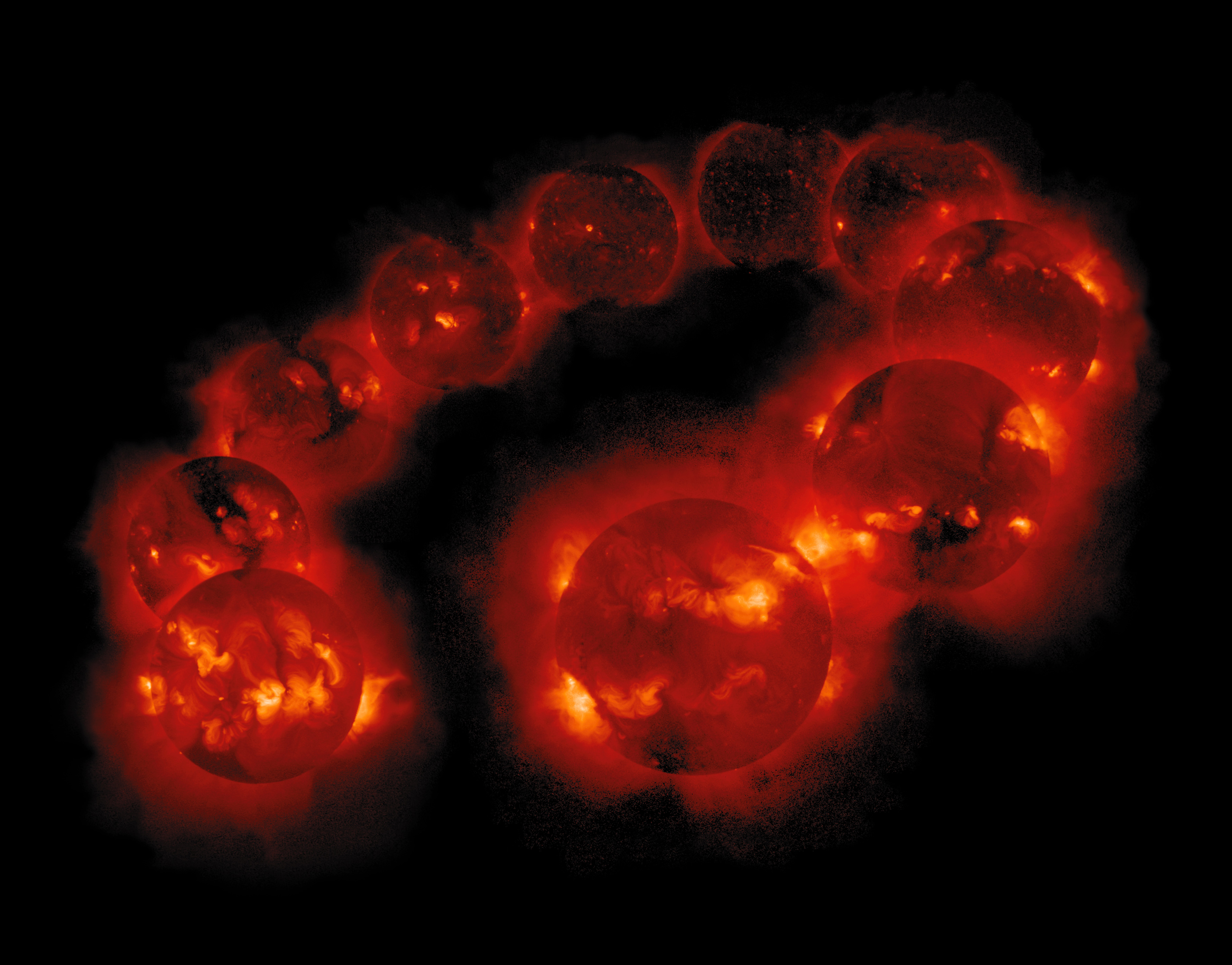 To cope with that, we use samples of known age, eg. tree rings. Radiometric dating those gives us a estimation for the amount of ¹⁴C at different times. Since the resulting calibration curve is not linear, there is no linear calculation possible to come up with the real age of things. 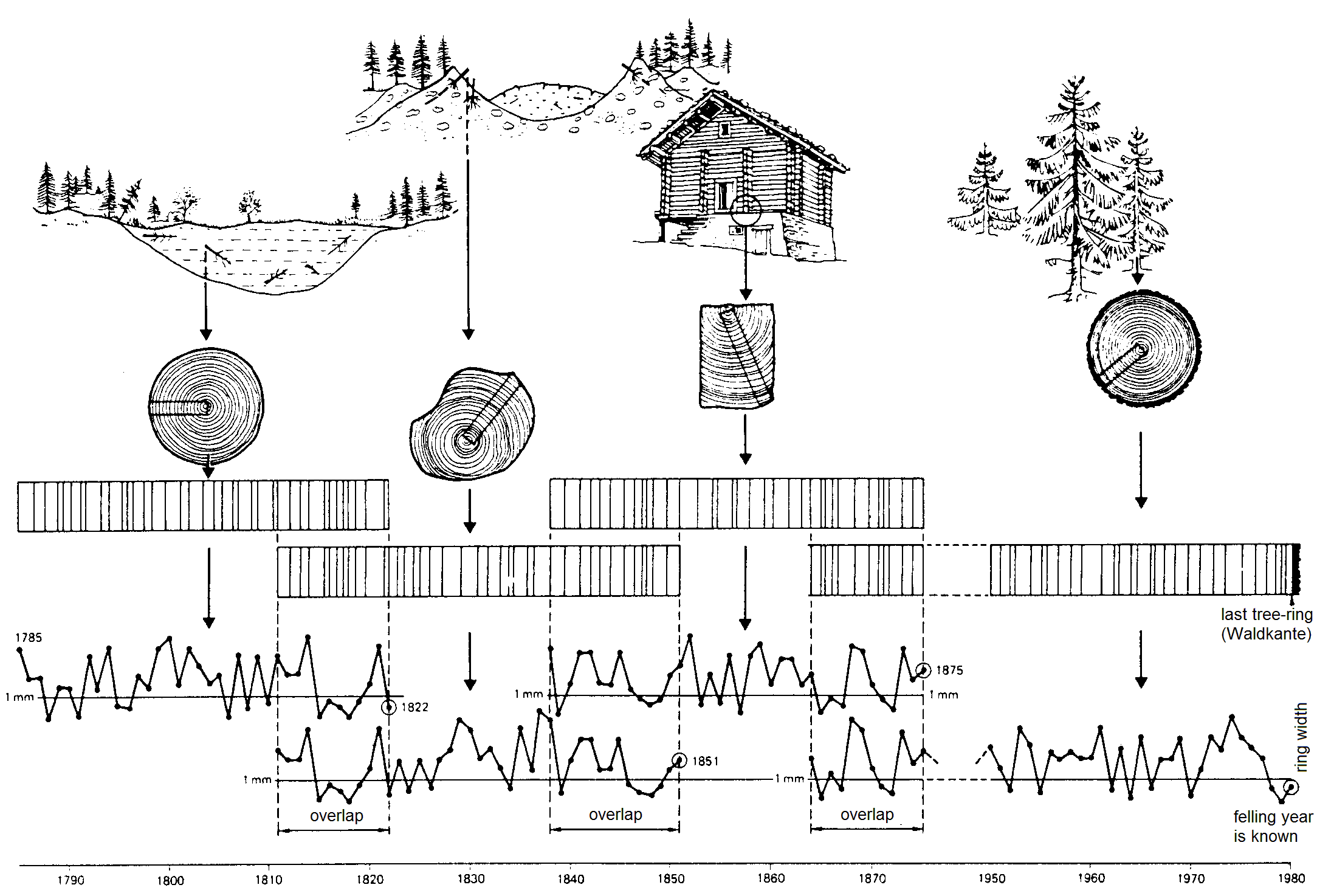 Real world calibration | The problem with the nonlinear nature

In an ideal world, you could use a ruler for translating a radiocarbon age to a calender age. But due to the wiggles of the curve, there are parts where a radiocarbon age could result in two or even more possible calendric ages.

Real world calibration | The problem nature of a ¹⁴C date

What makes things worse, is the fact, that you will never get a single radiocarbon age, but always a probability distribution with a ‘most likely’ value (the uncalibrated ¹⁴C age) with a standard deviation (eg. +/- 25). On the pro side is that this distribution behaves statistically well, since it follows a normal distribution. On the con side: this enlarges the possible range where a calibration gives multiple values, and it makes the calculation non-trivial. 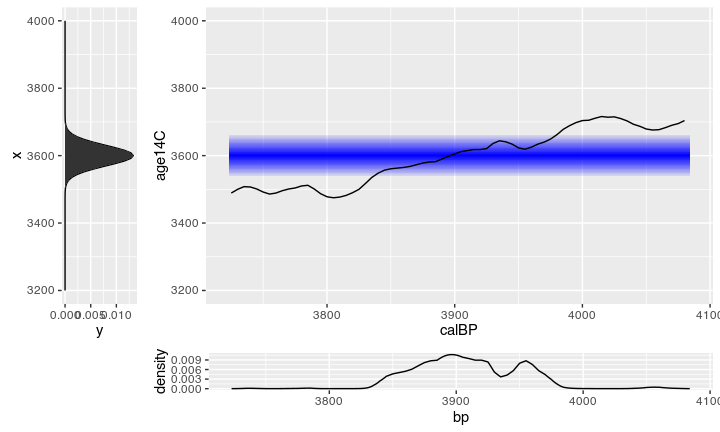 There are several approaches for calibration, one I have shown in an earlier post, this time we will deal with the Bayesian way.

The bayesian approach to that problem

There are several buzzwords that show up when people talk about Bayesian calibration. Those are eg.

The sound impressive, don’t they. But we will handle them one by one. 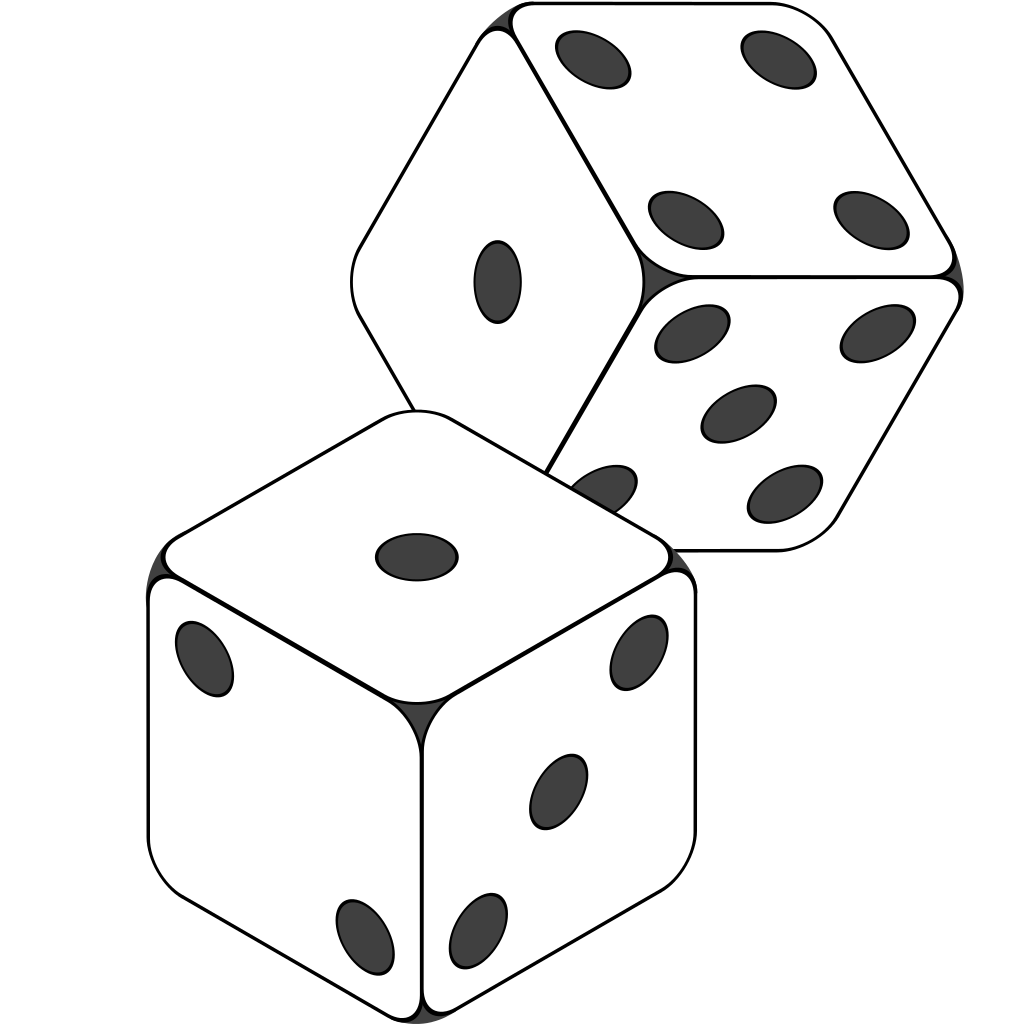 Monte Carlo methods are just a name for 'doing something including a random aspect', meaning eg. 'roll a dice'.

Together it is MCMC

MCMC stands for ‘Monte Carlo Markov Chain’. This is a procedure that can be used for estimating parameter that can not be measured directly, based on an external evaluation.

To demonstrate that and to prepare for the real ¹⁴C calibration, we will estimate the value of Pi.

We have a square of 1 m and an circle with radius 1 m.

We throw darts. We count, how many darts are in the circle, and how many are in the surrounding square. 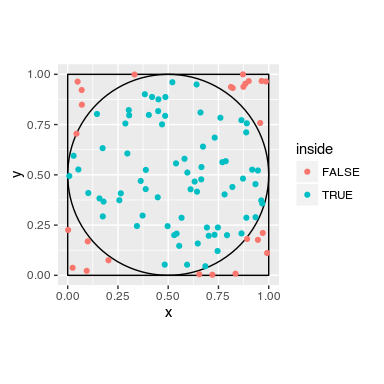 area of circle to area of square is:

To calculate the value of Pi, we have to count the darts that are inside the circle and those inside the square, and divide their ratio by 4.

We make a circle with radius of 0.5 and center it in a square (center = 0.5;0.5). We make a loop, that is repeated 10000 times. We randomly draw from a uniform distribution x and y for the point (we throw the dart). We check if the dart is inside the circle. If so, we memorize it. Afterwards, we divide the amounts of dart inside the circle by the number of trials, divided by 4.

is close to Pi:

Here you can see the experiment running live:

Anatomy of the algorithm

The algorithm we have used can be divided into several parts:

In this experiment, there are already several aspects that are similar to the ¹⁴C calibration that we intend to produce, but also some differences that we have to cope with:

With some little effort we will be able to proceed from here to Bayesian calibration.

Toward the Bayesian calibration

Lets start with things that are similar:

Setup looks rather similar. We only need different things, like uncalibrated date and its standard deviation.

Also the loop is rather similar:

In case of Pi, we propose random x and y coordinates. For the calibration, we propose a calendric date. But we do not propose any random date, but one that depends on our previous proposal. This is a Markov Chain, remember? We make a new proposal near to our previous one, and we make it more likely that it is nearer than that it is farther away. For that we use a normal distribution (rnorm).

Putting together what we have now:

Differences to the Pi example

From now on, things are a bit different due to the differences of our examples:

We cannot directly evaluate, if the date fits our calibrated date, because we do not know it yet. But we know the uncalibrated date, and will use that instead. Also, we do not have a inside/outside of the circle criterion (0/1), but one that has a certain probability, so values between 0 and 1 are possible. We will cope with that.

Differences to the Pi example

We evaluate against the uncalibrated date:

-> We have to backcalibrate the proposal

We have a probabilistic criterion, we only get a probability back if the proposal fits our uncalibrated date

-> We have to introduce some probabilistic (random) decision

In contrast to forward calibration, backward calibration is straight forward. We can use the ‘ruler approach’, since every calibrated date only reflects one uncalibrated one. The wiggles only go up and down, luckily not left and right!

With that, we have a likelihood function!

We start with the bp value of the uncalibrated date as our first proposal. Than we make a second proposal, in relation to the first one.

Our second proposal is:

With our likelihood function, we check how likely this second proposal is:

If the ratio is more than 1 (second proposal is better), we keep it.

If it is less than one (second proposal is worse), we keep it with a probability equal to the ratio. Meaning, we roll a dice…

Check if our random value is smaller than our ratio.

That is false. So our second proposal will not be recorded, and will not be part of the Markov chain.

With every loop, our collector records those proposals that were accepted, either because they were better, or because the were choosen in the relegation round… due to the random factor.

If we make a histogramm from the collected proposals, we get something that is essentially already the calibrated date: 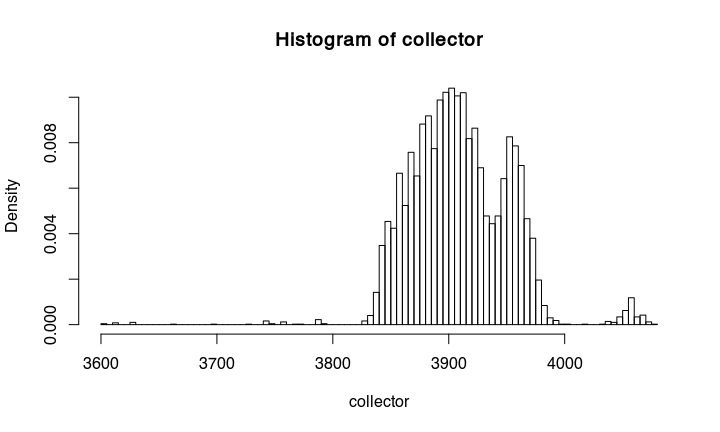 We can compare the resulting histogram with a calibration from Oxcal: looks similar! 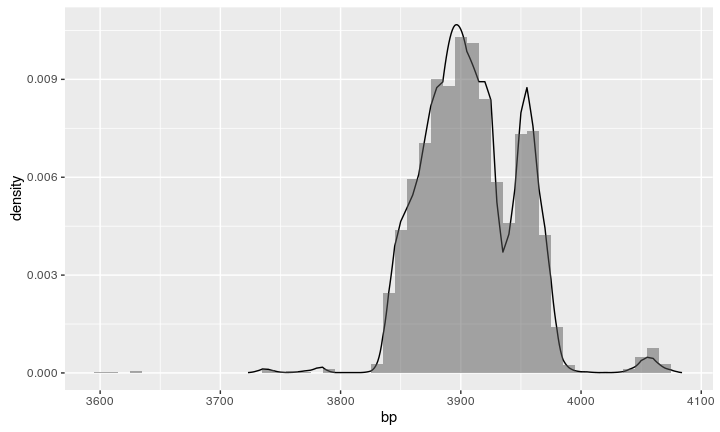 We can easily introduce this information into our calibration with a little extra code.

First step: Calibrate multiple dates at once. For this, we add another dimension to our variables (bp, std, collector, last_prob), to reflect the fact that we now deal with multiple data:

If we now let the code run, we can calibrate two dates at once: 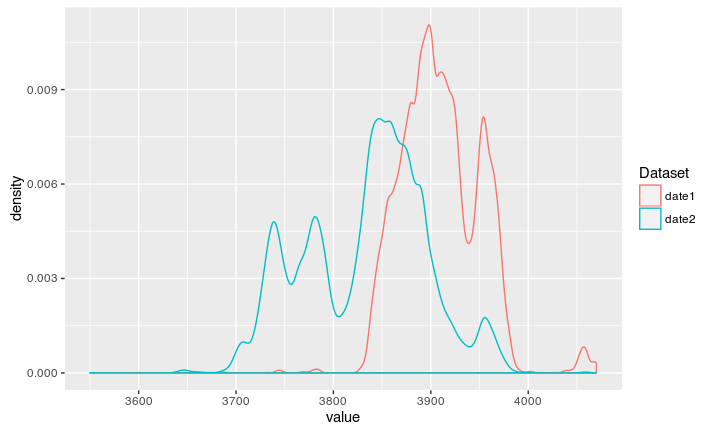 If calibrating for the first date (S_1), every proposal must be younger than the last proposal for the second date (S_2), and vice versa,

Now we can see the modeled date according to our stratigraphic information: 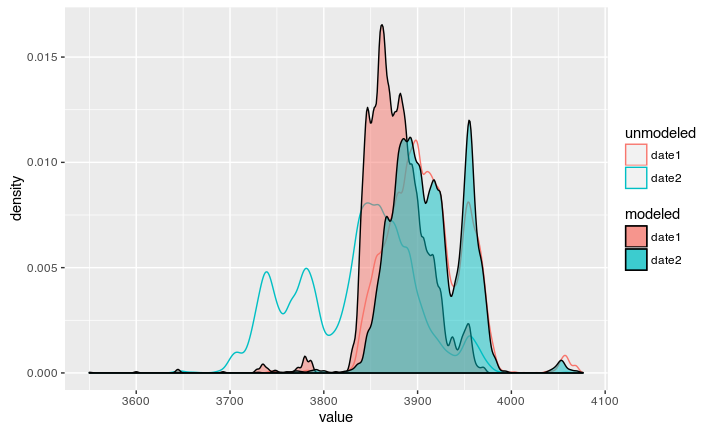 Both dates can again be compared against the Oxcal output: 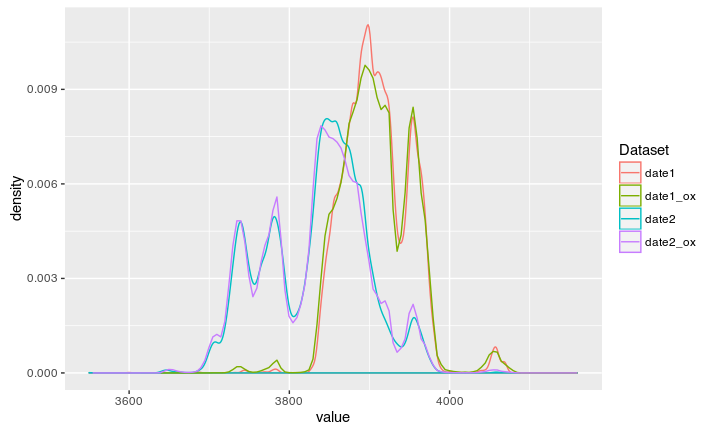 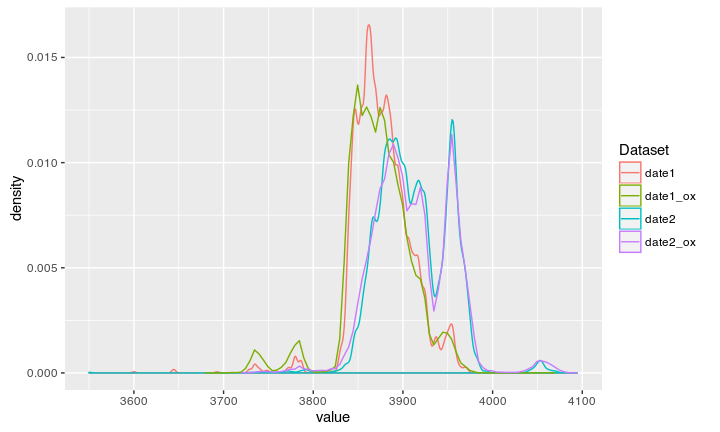