To get my new website finally online, I want to add something to the blog section. Here in the future mostly stuff should be published that is related to archaeology and statistics using R.

To start I want to add a bit that helps to understand the relationship of several items within a collection of data. To be more specific, how can I explore the correlation of lets say pottery types or in this case animal species in the archaeological remains of different sites. Do specific combination occure regularily, so that it might be the case that they are functional related?

As an example I will use the animal remains from sites of the so called Funnelbeaker Culture, on which I recently published an article that is still under review. The data mostly originate from the collection in an article of Jan Steffens (2005), but there are some additions from an [unpublished (?) master thesis of Peter Imperiale] [@Imperiale2001]. You may like to download the data set.

Within this data set the question was/is, how the different animal species do correlate, and how this can be explored/visualised intuitively. The most obvious candidate was a network that display the interdependence of those species. When two species correlate positively and significant, their representation in the network should be linked by a connection.

To start this enterprise, we first load the data into our R environment:

Displayed are now our sites with the NISP data of the species. For the construction of the network we now need a matrix, consisting of a row and a column for each species, filled with 1 for each situation when there is a positive significant correlation between the occurence of these both species. To archive this I used a modified snippet from the web (originally from Aleksandar Blagotić, function corstar.R), and the function corr.test from the library psych. I constructed this little function:

With this at hand we can now prepare our data for the network plot:

Second thing we need for a nice plot is the function ggnet2 from the library GGally. This library has some dependencies, especially regarding ggplot and sna, so you might have to install them first! 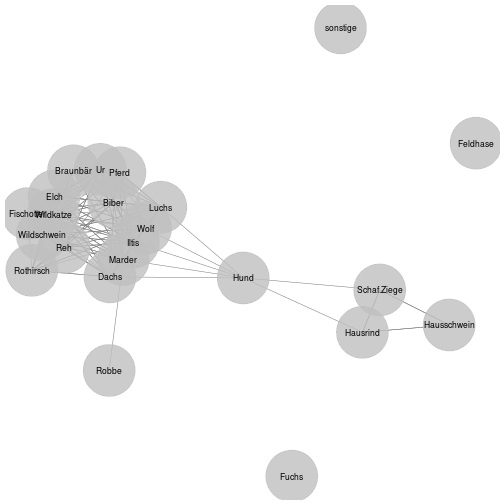 Voila! domestic species form one subnet (pig, cattle, sheep/goat), while most wild species form another subnet. There seem to be two separate spheres of interaction with the animals, indicating that there are two types of sites resp. activities: one is hunting, the other husbandry.